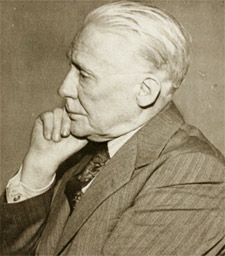 The expert card magician: Jean Hugard came into this world on December 4th 1871 in Toowoomba, Queensland, Australia as John Gerard Rodney Boyce originally aka ‘Jean Hugarde’. Professor Hoffman’s translation of Houdin’s Secrets of Conjuring and Magic was his introduction to magic literature and soon became his “bible.”

Over the course of his life he performed as Oscar Kellmann, Chin Sun Loo, Ching Ling Foo, and Jean Hugard. He began his professional career in 1896.

He moved to the USA in 1916, working vaudeville from 1916-18 and in his own magic theater in Luna Park (at Coney Island) 1919-29. When he retired, he went to Brooklyn to write and edit magic. Named 4th SAM (Society of American Magicians) Dean of Magicians in 1951. SAM Hall of Fame.

Hugard wrote on his own:

“Hugard’s Magic Monthly” 22 volumes which chronicles the American magic scene of the ’40s, ’50s and ’60s, with emphasis on New York’s ‘Inner Circle’.

Back to Greatest Card Magicians Page