Richard “Cardini” Pitchford was born in 1895 in a coal-mining town in Wales. During World War 1, he passed the time in the trenches by practicing his card manipulations. He continued to perfect his magic skills in hospital after being injured in battle.

He met Swan Walker in Chicago, while working his way across the U.S. and she became his wife and life long assistant.

During his long career, he played The Palace, Radio City Music Hall, London Palladium, Copa Cabana and other prominent theatres, nightclubs and Reviews.

He even was invited to appear in the 1938 Royal Variety Performance in the presence of King George VI of England. In 1957 at age 62, he appeared on one of the few magic television shows broadcast at that time: The Festival of Magic. Lower down this page is a video of what is believed to be the only known television footage of the master at work on that particular tv show. 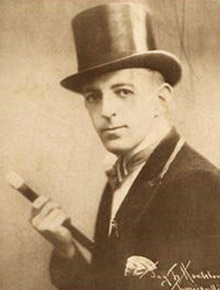 One of the most amazing things about this great magician is that Cardini did most of his magic routine while wearing gloves! This incredible skill was probably mastered when he served as a soldier in the cold damp trenches of the Great War (1914-1918).

The New England Magic Society described Cardini as “the greatest exponent of pure sleight of hand the world has ever known”. In 1970 He was honored with the title Master Magician awarded at the Magic Castle in Los Angeles, presented by Tony Curtis. In 1999, 26 years after his death, he was named one of Magic Magazine’s Top Magicians of the 20th Century.

Cardini’s trademark was to make it appear as though most of the amazing things that happened around him happened completely by chance – almost as if he was the victim of these misfortunes! To read more about Cardini, visit a site created by his grandson: Peter Pitchford here.

Enjoy this incredible and rare piece of film footage of  ‘The Great Cardini’ performing wonderful card productions and flourishes. He readily demonstrates his absolute mastery of card sleights whilst entertaining the public on the tv show “Festival Of Magic” in 1957.

As it is rare footage and because Cardini was such a master of card magic, we know you will excuse the relatively poor quality of the film 🙂

Back to Greatest Card Magicians Page