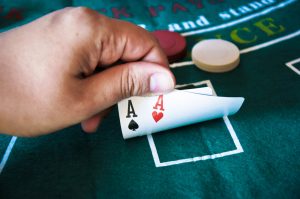 All forms of Poker recognize the same range and relative ranking of card combinations which determine ho has the best or worst hand. A Poker hand by definition consists of five cards (more may be dealt, but ultimately only five count).

If some of these are related by rank or suit in certain prescribed ways, they form a Poker combination. This may, but need not, involve all five cards. Any that do not form part of the combination are idle or dead, though they may be called into account to decide between competing combinations of otherwise equal value. The rank of individual cards from highest to lowest is always AKQJT98765432, with Ace alternatively lowest on certain occasions. From highest to lowest, orthodox Poker combinations are as follows. The figures following each are, first, the number of such combinations possible in a 52-card pack with none wild, and second the probability (expressed as a percentage, i.e., number of times out of 100) of being dealt such a combination straight from the pack.

Four of a Kind (624 = 0-0240 per cent) Four cards of the same rank, the fifth idle. One with a higher-ranking set of four beats one with a lower, and ties are impossible.

Full House (3744 ==0-144 per cent) Three cards of one rank phis two of another. One with the higher-ranking set of three beats one with a lower. Ties are impossible.

Flush (5108 == 0-1956 per cent) Five cards of the same suit not in sequence. As between flushes, the one with the highest-ranking top card wins, or second highest if equal, and so on. An all five-card tie is possible but extremely unlikely.

Three of a Kind (54,912 == 2-13 per cent) Three cards of the same rank, the other two idle and unrelated. Three of a higher rank beats three of a lower. Ties are not possible.

Two Pairs (123,552 = 4-75 per cent) Two cards of one rank, two of another, the fifth idle. To break ties, the one with the highest ranking pair wins, or the second highest if equal, or the higher idle card if still equal.

One Pair (1,098,240 = 42-2 per cent) Two cards of the same rank, the other three idle and unrelated. Ties are decided in favour of the highest-ranking pair, or best unmatched card if equal.

Nothing (1,302,540 = 50-1 per cent) Also called a ‘high card’ hand because competition between combinationless cahands is decided in favour of the one with the highest-ranking top card, or second highest if equal, and so on. (This is consistent but illogical, since combinationless hands with Ace high are over 120 times commoner than those with Seven high, others ranking pro rata.)