The precise origins of card magic are subject to debate though it’s generally believed that card tricks were first developed by gamblers who wanted to improve their chances of winning when playing card games. What these early pioneers of gambling would have made of today’s technology is anyone’s guess!

Playing cards themselves originated in the Orient with China and India amongst the main contenders for the claim of country of origin. It is thought that cards may have been introduced to Europe in the 14th century by Arabs who had travelled from the Orient. 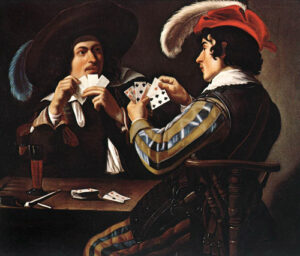 Italy, Spain and France feature in the first literary mentions of playing cards and card magic. One of the earliest, general references to card tricks is an article from 1408 which tells of a card cheat in Paris who sought to gain advantage by manipulating the cards he was playing. The first written mentions of actual performers of card tricks are: