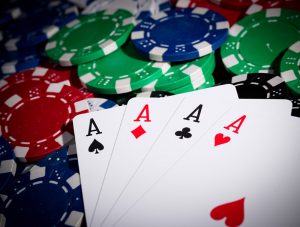 Both Draw and Stud Poker may be combined with a major variant called Lowball, in which the pot is won by the lowest hand, or, more popularly, High-Low Poker, in which it is shared between the highest and the lowest hand. These and other variants follow the main descriptions of Draw and Stud.

The reason for so variegating the basic game is usually given as a desire to speed up the action by increasing the relative frequency of ‘good’ hands, which otherwise rarely occur. Though true, this is only half the story. Each variant also introduces its own schedule of mathematical probabilities. These can hardly be learned by rote, but the skilled player, experienced in several forms of the game, starts out at a considerable advantage over the player whose knowledge stops short at orthodox Draw Poker.

It is for this reason that the most popular form of the game is Dealers Choice, in which each dealer announces exactly what game is to be played on his own deal, or for the round of deals initiated by himself.He is even at liberty to invent new variations and to name them as he pleases. In this way the mathematical variety of the game is given full play almost from deal to deal.

Back To Poker Variations Part 1