How To Perform The Vanishing Ace Card Trick

Before you do the trick, remove the Ace of Diamonds from the pack and hide it somewhere. Take out the Ace of Spades, Ace of Hearts and Ace of Clubs from the pack. Lay them face down on the table. Tell the audience that you are about to make one of the Aces magically disappear. As you say this, place the pack on the table and pick up the three Aces, arranging them into a fan which you show to the audience. The two illustrations (below) demonstrate how the three Aces must be arranged so that the middle Ace appears to be the ace of diamonds when it is really the Ace of Hearts. 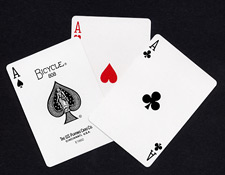 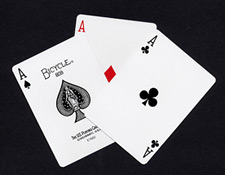 Say to your audience: “Here are the three Aces – the Ace of Clubs, Diamonds and Spades”.

Next, square up the three cards and tell the audience that firstly you will put theAace of Spades near the bottom of the pack and insert it face down into the lower part of the pack. this allows the audience to catch just a glimpse so that they see it really is the Ace of Spades.

Then say: “… and the next card: the Ace of Diamonds I will place in the centre of the pack”. Do this but of course do not let the audience see this card. Then say “Finally, I will place the Ace of Clubs face down near the top of the pack” which you do.

Of course, by this point the trick is already done as the Ace of Diamonds is not actually in the pack but wherever you placed it earlier. Allow a spectator to go through the pack to verify that the Ace has disappeared. This allows you to reveal the Ace of Diamonds in whatever way as you wish!

NOTE: For anyone who enjoys unusual card tricks involving Aces, you might want to read about Stanley Collins. He was an English magician born in the late 19th century whose card magic was ahead of its time. His Collins’ Aces card trick is still performed today.